A multitude of maturity parameters using a range of different compound classes have been tested and developed in the past for use in oils, in order to determine the maturity of their source rocks. Such parameters most commonly use biomarkers such as hopanes and steranes, aromatic hydrocarbons including naphthalenes and phenanthrenes, various gasoline-range hydrocarbons and more recently the diamondoids.

As a source rock is progressively buried, and generates and expels oil, the composition of the oil being expelled changes with increasing maturity. Early-generated oil is denser (low API gravity) and richer in biomarkers, whilst oil generated at high maturity is less dense and richer in gasolines and diamondoids Figure 1A. Oil accumulations typically represent a mix of oil generated over a range of maturity levels, due to the depth (maturity) variation of the source rock in the kitchen area in both time and space (Figure 1B).

Figure 1: Diagrammatic representation of the effects of increasing maturity on the composition of the hydrocarbon charge, including molecular composition.

A natural consequence of the accumulated oil being a composite of continuous charge of varying composition generated over a range of maturities, is that the oil shows a complex (mixed) maturity signal. This is further complicated by the inherent bias between the different compound classes whereby the biomarkers are naturally of lower maturity than the aromatic hydrocarbons which in turn show a lower maturity than the gasolines (Figure 2). This difference in interpreted maturity level for a single oil sample depending which compound class is examined is to be expected (Wilhelms & Larter, 2004); it is a natural outcome of charge mixing and is not a result of error or inconsistency between the various molecular maturity parameters.

Although all accumulated oils are effectively mixtures, at least from within a single source kitchen, some fields contain oil charges from either (a) two source rocks in the same kitchen, or (b) the same source rock in two different kitchens; in either case the overall maturity of the two charges may differ, often significantly. It is essential to recognise such mixed maturity charging to avoid significant errors in petroleum systems modelling. This requires an understanding of the concentrations of different compound types in the charges being mixed. Accordingly, a very high maturity oil charge to a mixed oil may only be recognisable in the gasoline-range hydrocarbons and diamondoids – compounds that are particularly abundant in high maturity fluids – whilst the biomarkers in a mixed oil will mainly represent the lower maturity charge(s) contributing to the mixture. Molecular maturity data have been used for oils in the Barmer Basin (India) to identify such a high maturity charge from unusually high values of gasoline maturity parameters (not shown here, but published by Farrimond et al., 2015). 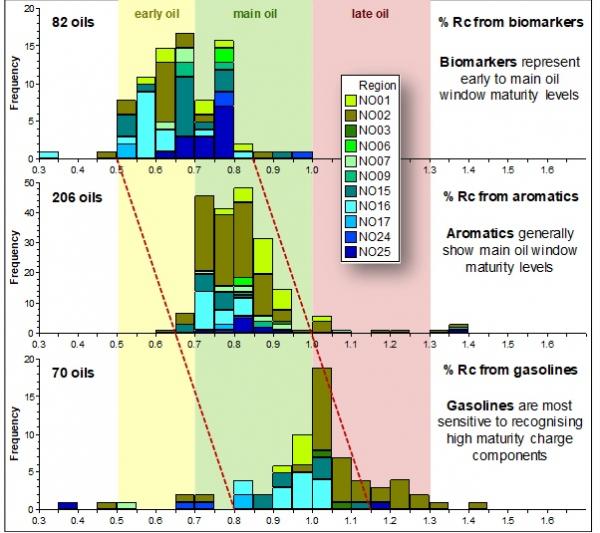 Figure 2: Three different molecular maturity parameters, converted to calculated vitrinite reflectance (%Rc), for a suite of North Sea oils from offshore Norway (coloured by quadrant). The apparent disagreement in maturity between compound classes is to be expected due to their natural bias to generation in different maturity windows.

Note: This Technical Note formed part of a presentation (and associated abstract) given by Paul Farrimond at IMOG2019 (the 29th International Meeting on Organic Geochemistry, Gothenburg, Sweden, 1-6 September 2019).