by Marianne Nuzzo and Mischa Gehlen

Oil spills can have a significant impact on the environment and ecosystem, as e.g. seen in 2019-2020 along the coast of northeast Brazil or after the Deepwater Horizon accident in 2010. But also on a smaller scale oil pollution events cause a range of environmental risks and have to be investigated. The source of oil pollution is not always obvious though as it can be of natural origin, e.g. oil seeps, or anthropogenic, e.g. leaking pipelines or large spills from tankers. Identifying, characterizing and where possible quantifying the source of hydrocarbons is thus an important part of environmental remediation (e.g. Wang et al., 2016).

The use of biomarker data is a long-established tool in petroleum system analysis, but is also widely used in forensic geochemistry to fingerprint petroleum contaminations. Biomarkers are complex molecular fossils derived from once-living organisms which can be measured both in crude oils and in their source rocks, thus representing powerful oil-source correlation tools (e.g. Peters, Walters and Moldowan, 2004). A wealth of biomarker compounds, frequently saturated cyclic triterpane and sterane hydrocarbons, have been shown to be diagnostic of source-rock formation type, age or depositional environment with diagnostic ratios (DRs) being used routinely for oil-source and oil-oil correlations to characterise petroleum systems. Despite being trace components of organic matter/petroleum, biomarker abundances can be measured very precisely and reproducibly by Gas Chromatography-Mass Spectrometry in Selected Ion Monitoring mode (GC/MS-SIM). Consequently, DRs have been shown to be of great use not only for qualitative, but also for quantitative geochemistry in the oil & gas industry (e.g., Peters & Fowler, 2002), and forensic oil spill geochemical studies (Wang et al., 2016). In the latter case, the high precision and reproducibility of the analyses is particularly crucial for the reliable support of legal decisions regarding contamination sources. As the source of crude or processed oils released in the environment is frequently unknown, a defensible identification based on correlation to suspected sources is a critical part of oil spill assessments (Stout et al., 2001). Two major processes complicate the correlation of the spilled oil to its source(s): weathering of oil in the environment, and mixtures with hydrocarbon compounds from different sources.

Weathering encompasses processes acting at an early stage of the spill, namely spreading, evaporation, dispersion, emulsification and dissolution, as well as longer-term processes such as photo-oxidation, sedimentation and biodegradation, which determine the ultimate fate of the oil (ITOPF Ltd, 2011). Moreover, laboratory studies have shown the terpane and sterane biomarkers to be remarkably resilient to biodegradation in the environment (Foght et al., 1998; Wang et al., 1998), although there is evidence of their degradation under severe weathering conditions (e.g. Chosson et al., 1991). Mixtures of oils from different sources frequently take place in the environment because the oil spilled mixes with background contaminations (e.g. from ships), and sometimes with petroleum from natural seeps (Leifert et al., 2006). Biomarkers represent a powerful forensic geochemistry tool to identify source(s) of oil spills in the environment since they are relatively resistant to weathering, and because accurate GC/MS-SIM concentration measurements support the quantitative fingerprinting of oil spills (Douglas et al., 2016). Importantly, however, forensic biomarker geochemistry requires the use of particularly stringent protocols at all stages, from sample collection (Daling et al., 2016) to data interpretation, whether based on qualitative or semi-quantitative (e.g. CEN methodology; Kienhuis et al., 2016) or on quantitative methods (Douglas et al., 2016).

Qualitative methods assume that “matching of oil samples is essentially a profiling technique based on the premise that identical oils give identical chromatograms” (ASTM, 1990), which besides introducing considerable subjectivity raises concerns regarding the effects of (i) weathering, (ii) mixing between similar oils (similar crudes, or similar refined petroleum products) and (iii) mixing with background oil contaminations. Semi-quantitative methods rely on the measurement of chromatographic peak heights or areas and these results can be used to match the spilled oil sample to candidate sources using graphical (Figure 1), statistical or numerical analysis tools (Boehm et al., 1997; Dahlmann & Kienhuis, 2016; Mudge, 2016). 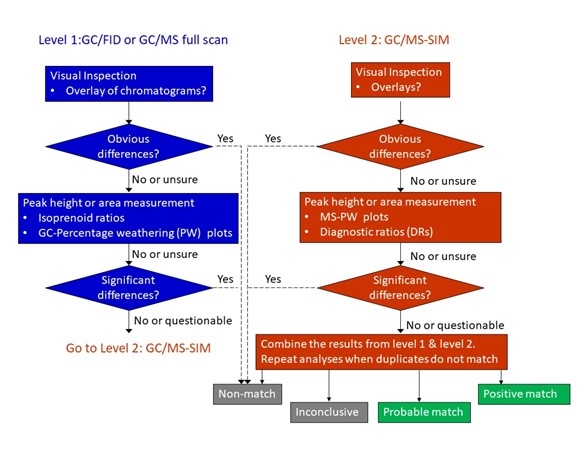 However, only quantitative data enable the use of DRs to unravel the potentially mixed origins of spilled oil samples in the environment. Hence adequate quantitative data allow to address the issue of spilled petroleum that is comprised of mixtures (Douglas et al., 2016), or that occurs in a highly contaminated urban area or again in a mature oil province. DRs calculated using semi-quantitative data cannot support such interpretations because, unlike concentrations, ratios do not generally mix linearly (Lundegard & Surgi, 2012).