There seems to be a surprising lack of published work showing source rock screening data for large data sets of Upper Jurassic (Kimmeridge Clay & Draupne Fm.) source rocks in the North Sea; this despite the abundance of such data for this mature petroleum province.  This brief technical note therefore presents extensive data from two public geochemistry databases compiled by IGI for the UK Oil & Gas Authority (now the North Sea Transition Authority) and the Norwegian Petroleum Directorate.

Figure 1 shows geochemical screening data plotted against measured depth for the Kimmeridge Clay Fm. in the UK Central North Sea.  The samples plotted are all those within the identified Kimmeridge Clay Formation interval in each well and have not been cleaned up to remove non-source rock or contaminated samples.  Hence, the Total Organic Carbon (TOC) content is highly variable (Fig.1A), but with a mean value of just under 5% TOC (n = 3,738) in the upper 3,000m.  The TOC content falls from around 3,000m, to a mean of 3.6% (n = 507) in the interval from 4,500-5000m.  This fall in TOC corresponds to the oil window, with conversion of kerogen to petroleum and subsequent expulsion of oil.  This process is more apparent in the strong fall in the S2 parameter from Rock Eval pyrolysis (Fig.1B). 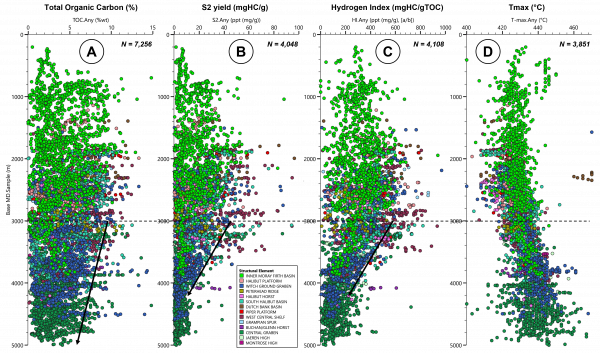 The S2 parameter is a measure of the pyrolysable organic matter in the source rocks, essentially representing the kerogen that with increasing burial and maturation would convert to form petroleum.  Unlike TOC, the S2 parameter is less prone to contamination by oil-based drilling mud and organic additives to water-based muds, and excludes most of the in situ petroleum and the more inert fraction of the kerogen (“dead carbon”) that would not convert to petroleum.  Consequently, a much stronger decrease is observed for S2 than for TOC as kerogen is transformed to petroleum within the oil window.  This strong decrease in S2 results in an associated fall in the measured Hydrogen Index (which is calculated from S2/TOC; Fig.1C).

Although the number of samples is significantly lower, the same trends in TOC, S2 and Hydrogen Index are seen in the data set for the Draupne Formation in the Norwegian North Sea (Fig.2).  It is also notable that the decline in S2 and Hydrogen Index starts at around 3,000m – the same depth as seen for the UK Kimmeridge Clay data set (Fig.1). 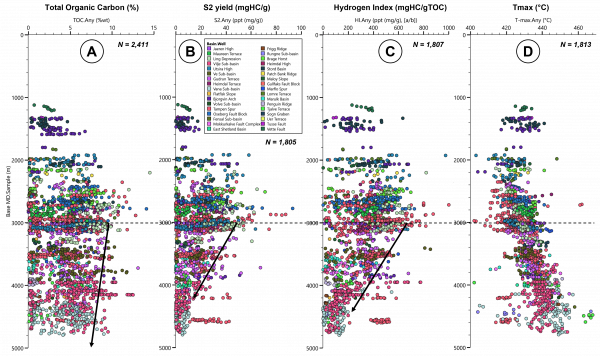 Several factors will tend to obscure or blur these depth trends in geochemical screening data.  Firstly, the samples are plotted as measured depth from the rotary table, so do not allow for different water depths or inclination of the well (although most exploration wells are vertical or almost so); ideally, true vertical depth below sea floor would be used.  Secondly, differing geothermal gradients and burial histories (especially uplift) across each region will result in differing depths to the oil window.  A third factor may be the presence of caved material from shallower depths in cuttings samples which comprise most of the data shown here.  Given these factors it is quite surprising that the depth trends  evident in Figures 1 & 2 are as clearly defined as they are.

Databases:  The large geochemical databases, including the Upper Jurassic source rock screening data overviewed here, were compiled by IGI Ltd. from released data and have been made freely available via the websites of the UK Oil & Gas Authority (now the North Sea Transition Authority) and the Norwegian Petroleum Directorate: