Another technical note in the Art of Science series by Dan Cornford of IGI Ltd.

Uncertainty and variability are often confused. The former represents a state of our minds, the later a state of nature. This short note explains the key concepts to understand the distinction between the two concepts, and how they relate to each other. Begg et al. (2014) provides a complete overview which introduces the key concepts in some detail. This note provides a focussed view on the relation between uncertainty and variability.

To start, imagine we have a cube of rock, let’s say 1m3 for somewhere in Earth’s crust. For now, let’s call this our sample, the population being all the rock in the Earth’s crust.  Imagine we are interested in the Total Organic Carbon (by mass) in the rock volume (as a proportion of the total rock mass). This is the classic TOC measurement, reported as a %wt.

We can reasonably ask the question before we take any measurements, what is the TOC of the 1m3 of rock?

There are several ways we could answer this. We know TOC must be between 0 – 100%, so we could simply say we don’t know, but it is somewhere between zero and one hundred percent.

Another reasonable answer would be more refined. We have some idea of the distribution of TOC in rocks of the Earth. Most sedimentary rocks will have TOC in the range 0.1 to 12 %wt, and even coals rarely exceed 85 %wt TOC. Igneous rocks will typically have TOC of 0 %wt.  We could define our distribution of TOC using a probability distribution of some form, or a non-parametric approach such as percentiles, e.g. our p10, p50 and p90 estimates.

Now I would note there is no randomness in the TOC of the 1m3. There is a value. We do not know it. This is uncertainty due to lack of knowledge – epistemic uncertainty.

Your epistemic uncertainty can be different to mine. It depends on what you know, or rather believe you know. Only nature ‘knows’ the true value of TOC in that 1m3 of rock.

I suppose at this point most of you will be wanting to ask more questions, where is the rock from, what is the lithology, the stratigraphy, colour, the mass, etc.

If I now told you that the rock came from the Kimmeridge Clay Formation in the UK sector of the Northern North Sea, most people would revise their judgements on the TOC of the 1m3.

The rock has not changed, the TOC is no different, but our beliefs about it will change.

There is a subjective uncertainty, but this is a property of our minds, not of nature.

Now let’s change frame of reference. Let’s assume the 1m3 block is our population. Imagine we slice this very carefully into one million 1cm3 samples. It seems very unlikely that the TOC will be spatially homogenous within this block. Vertical variation of TOC is typical, but it is likely that there is also lateral variation.

If we perfectly (1)  analyse all one million 1cm3 samples we can calculate the statistics of these, let’s say these have a mean of 1.5 %wt, and a sample (= population) standard deviation of 0.5 %wt. At this point we can state the mean TOC of the 1m3 is 1.5 %wt, and the standard error on that estimate is zero. That is, we do not have uncertainty, simply variability of TOC within the block.

There is a ‘true’ statistical variability (distribution), and it is a property of nature.

Imagine we pick ten 1cm3 blocks at random (or we could use an experimental design strategy to select the blocks – that will be the topic of a future note). Assume we can again measure the TOC of each 1cm3 block perfectly. 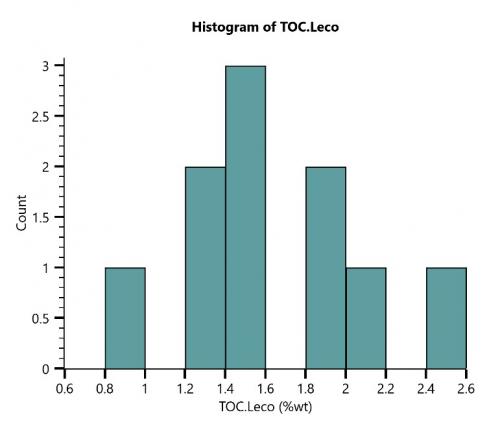 We can calculate the mean (1.61 %wt) and the sample standard deviation (0.46 %wt) which characterise the variability of TOC within the block, based on the finite sample.

The relation between variability and uncertainty

The confusion is exacerbated by the fact that we can use information about variability to inform uncertainty judgements. And this can be done rigorously if we take care to define things carefully.

When considering our uncertainty about a value, we can often use measurements, and the variability of these measurements to help guide our judgements, or beliefs. In the previous section we considered how a small sample of ten measurements of TOC could be used to estimate the variability of TOC within the block. We showed then how this could be used (with assumptions) to estimate our uncertainty about the mean TOC in the whole 1m3 volume. Depending on the assumptions we make (our judgements), different people might still obtain different uncertainties. As more samples are taken, it is likely the weight of the evidence from the measurements will reduce the impact of our prior assumptions and our judgements will converge.

We should not, however, confuse the numeric equality of the uncertainty to the variability in this specific case to infer they are the same thing. Variability can inform uncertainty judgements.

There are very few natural examples of randomness. True randomness induced uncertainty that is not epistemic, but rather aleatory. The key distinction is that aleatory uncertainty cannot be reduced by obtaining more knowledge. It is a state of nature, not of our minds. The most famous, canonical, example of randomness is the timing of radioactive decay of isotopes. This process is believed to be truly random, but outside of radioactive decay, above the quantum scale, I would claim there are no truly random processes in geoscience. There are chaotic processes, which make prediction practically impossible. For example, turbulent flow is in essence unpredictable beyond a very short timescale and can only be described in terms of its statistics. But that is another story...

For most practical applications randomness is not an important factor. Variability is. Uncertainty (of an epistemic form) is. Neither require randomness.

The importance of precision

You have probably all been told to beware of false precision. The TOC of the sample was 1.631307 %wt is a precise answer, but that precision has two practical issues. First, measurement error is likely to be significantly larger than the implied accuracy. Secondly, it is not practically relevant to worry about TOC to 6 decimal places of precision.

But not all precision is redundant. When considering problems of communication, and the confusion between variability and uncertainty, one of the most significant causes is a lack of precision in describing what we are interested in learning about or making judgements about.

Uncertainty can be informed by variability.

Managing uncertainty is essential to the scientific method and plays a key role in the geosciences. Working with uncertainty can be challenging, and has not been widely, or well, taught in the geosciences. However, once you embrace the subjective nature of uncertainty it can open doors to a richer and more honest description of the problems we tackle and in particular facilitate rational decision making and risk management.

[2] Note summary statistics / moments are just one way to represent variability or uncertainty. We can use a range of other methods including probability distributions, non-parametric methods such as percentiles / histogram, or discrete samples / realisations.