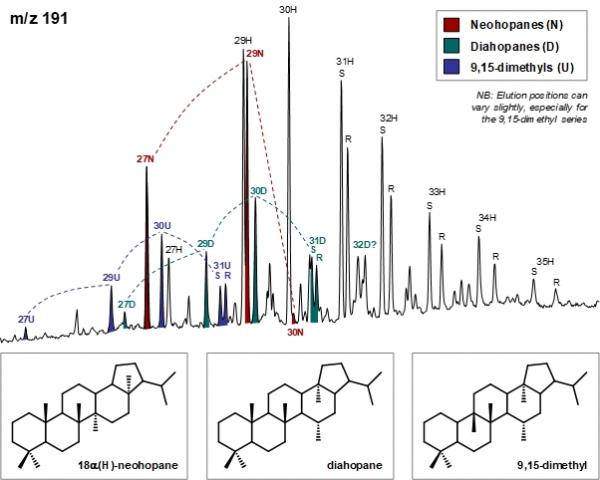 Figure 1: The m/z 191 mass chromatogram of a Toarcian shale from Italy showing particularly high abundances of the three most commonly recognized series of rearranged hopanes.  (The regular 17a(H),21b(H)-hopanes are labelled but not coloured).

Typically, only the more prominent members of these rearranged hopane series are routinely reported by geochemical laboratories, often limited to the C27 & C29 neohopanes (Ts & 29Ts) and the C30 diahopane.  These compounds are commonly used in molecular maturity parameters (see later).

Interestingly, the diahopanes and 9,15-dimethyl series both show a similar carbon number distribution to the regular hopanes, with C30 dominating (Fig.1) and extending to C35; in contrast, the neohopanes are dominated by C27 (Ts) and C29 homologues with only very minor C30Ts.  This difference is likely due to differing diagenetic pathways involved in the rearrangement of the biologically-derived regular hopanoid structure.  Although rarely reported due to their low abundance, rearranged hopanes methylated at C-2 are known to occur for both the diahopane and 9,15-dimethyl series (Farrimond & Telnæs, 1996), and most likely for the neohopanes, consistent with the origin of these compounds being from (clay-catalysed) rearrangement of common hopanoid precursors, rather than requiring an unusual precursor hopanoid.

Rearranged hopanes are more thermally stable than regular hopanes, and because of this they have been used in molecular maturity parameters where they are ratioed against non-rearranged hopanes, for example: Ts/Tm (27N/27H in Fig.1), 29Ts/29ab (29N/30H) and Diahopane Index (30D/(30D+30H)).  Two cross plots of such parameters (expressed as indices) for UK Northern North Sea oils are shown in Figure 2.  Increases in these parameters with increasing maturity of oils is believed to be mainly due to the relative stabilities of the rearranged hopanes compared to regular hopanes (Farrimond et al., 1998).  Molecular mechanics has shown that diahopanes are more thermally stable than neohopanes (Ts series), which are more stable than regular hopanes (Moldowan et al., 1991).

Although they are almost entirely used in maturity estimations, especially within the oil window, it is known that there is some source/facies/lithology dependency on the rearranged hopane abundance in source rocks; also, the different carbon number distribution of the neohopane (Ts) series must be due to a different diagenetic pathway and/or source molecule(s).  Consequently, rearranged hopanes offer significant potential in oil-source correlations.  They also have the advantage of being more resistant to severe biodegradation than are the regular hopanes.  We can only encourage geochemists to give these compounds more attention and ask laboratories to identify and report more members of these series so that increased data become available so that our understanding can develop further.