Hopanoids are produced as complex functionalized lipids, bacteriohopanepolyols, in the membranes of a wide range of bacteria.  During sediment burial and diagenesis these bacteriohopanepolyols undergo various alteration processes, mainly the loss of functional groups along with some or all of the side chain, to produce the hopane biomarkers that are near-ubiquitous in organic matter in the geosphere, including oils and their source rocks.  Different numbers and types of functional groups on the side chain have been shown to contain information regarding the specific bacteria from which they derive; however, this information is lost during the diagenetic conversion to the simpler hopane biomarker products.

The related methylhopanes have an extra methyl group at the 2- or 3-position in the A-ring of the hopane structure (Fig.1) which is inherited from the original methylbacteriohopanepolyol lipid in the source bacteria and can thus preserve valuable information to the petroleum geochemist.  2-Methylhopanes and 3-methylhopanes derive from different bacteria, and although their sources are not fully constrained work has shown that various cyanobacteria and alphaproteobacteria are producers of the 2-methyl precursor lipids, whilst the 3-methylhopanes appear to be strongly related to methanotrophic bacteria and lacustrine (and other methane-rich) depositional settings.  Whilst the precise origins of the two groups of methylhopanes are likely to be much more variable than indicated here, a broad relationship with these bacterial sources is sufficient for them to be useful in oil source correlations. 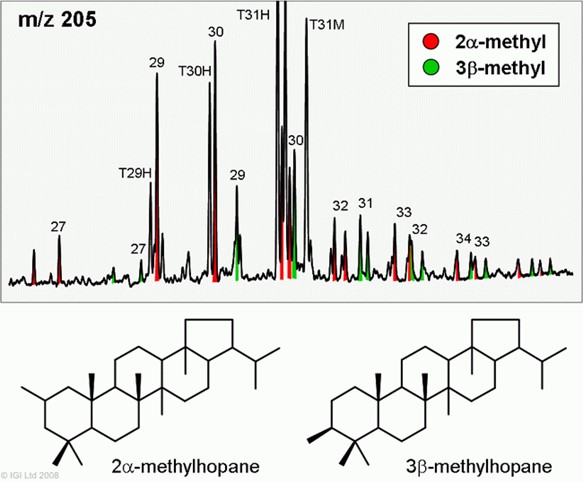 Figure 1: An m/z 205 mass chromatogram showing the distribution of 2a- and 3b-methylhopanes in a marine shale (Farrimond et al., 2004); some regular hopanes (uncoloured) are labelled for reference.

Methylhopanes are identified and quantified in the m/z 205 mass chromatogram from GC-MS analysis of the saturated hydrocarbon fraction of an oil or source rock extract (Fig.1).  Peaks can be relatively small in comparison with the hopanes, particularly the C31 homologues which have an especially strong response in this mass chromatogram.  In consequence, methylhopanes have often been overlooked in petroleum geochemical studies, and service company laboratories often only identify and report the most abundant methyhopanes (the C30 ab hopanes with additional 2-methyl or 3-methyl groups).

Figure 2: Ternary plots showing the relative abundance of 2-methylhopane, 3-methylhopane and C30ab hopane (divided by 20 for appropriate scaling of the graph; Farrimond et al., 2004) in a suite of oils and source rocks.

Methylhopanes are ubiquitous in oils and source rocks, generally in the range of 1 to 10% of the abundance of the hopanes.  Their composition varies widely due to differing bacterial inputs to the original depositional environments.  Marine samples are generally characterised by higher proportions of 2-methylhopanes corresponding to a dominant origin from cyanobacteria (particularly in shallow marine environments) and alphaproteobacteria.  Lacustrine oils and source rocks show a wide range in methyhopane composition, but some, representing a distinct source facies (possibly alkaline lakes) are enriched in 3-methylhopanes probably derived to a large extent from methanotrophic bacteria.