by Marianne Nuzzo and Mischa Gehlen

Stable isotopes of an element have the same chemical properties (i.e., same number of protons and electrons), but the nuclei of the rare isotope(s) contain(s) additional neutron(s). There are, for instance, two stable carbon isotopes (12C and 13C) and three stable oxygen isotopes (16O, 17O and 18O), with the light isotope being always the most abundant one (Fig. 1).

Figure 1: Schematic representation of the nuclei of the stable isotopes of carbon and hydrogen (images after NOAA). Note that the mass difference between both isotopes is much more significant for hydrogen (the deuterium nucleus is almost twice as heavy as the nucleus of protium) than it is for carbon (mass difference < 10%). This explains why isotope effects are particularly large for stable hydrogen isotopes.

The difference in nucleic mass bestows subtly different physical properties to the different isotopes. For instance, the rate of a reaction involving the formation or breakage of a covalent bond is slightly higher if the bond involves two light isotopes than if it involves a heavy isotope (e.g., Criss, 1999). All reactions implicating covalent bonds are accompanied by such an isotope effect: an Equilibrium Isotope Effect (EIE) or a Kinetic Isotope Effect (KIE) for a reversible or an irreversible reaction, respectively. While the isotope effect is not measurable, it results in the partitioning of the stable isotopes between reactants (Rs) and products (Ps), i.e., it produces a stable isotope fractionation which can be measured as a fractionation factor (aP/R Please note a = Alpha due to website software not supporting symbols) between product and reactant (Fig. 2). 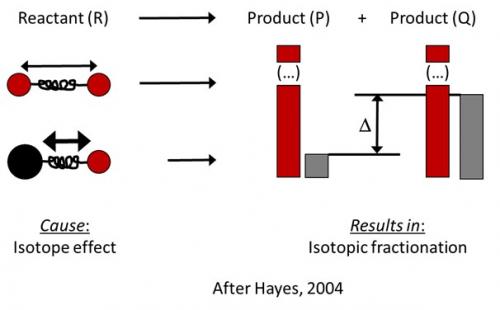 Figure 2: Schematic representation of how an (unmeasurable) isotope effect during a reaction causes the (measurable) partition of stable isotopes between reactant and products, i.e. a stable isotope fractionation (after Hayes, 2004)

Most models commonly used in hydrocarbon gas stable isotope geochemistry assume that natural gas generation can be modelled as an irreversible reaction (“cracking” of hydrocarbon compounds [P] from the kerogen [R]) taking place in a closed system (the reactant is only the initially available quantity of kerogen, and the products remain in the source rock). Although fundamental research led during the last 10 to 20 years (e.g., Tang et al., 2000; Burnham, 2017; Stolper et al., 2018) questions the validity of some of these assumptions, these traditional models nevertheless represent valuable interpretation tools if used critically. This technical note aims at highlighting how the “Rayleigh fractionation effect” (Fig. 3) underlies widely used models to infer on the origin of natural hydrocarbon gases. 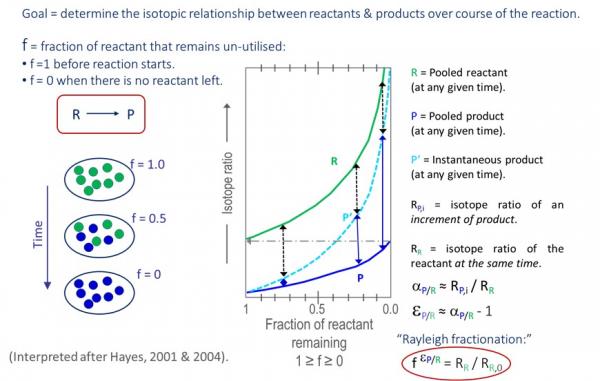 As shown on the schematic representation of the isotopic composition of reactants and products for an irreversible reaction in a closed system (Hayes, 2004; Fig. 3), the stable isotope ratio of the “instantaneous products” (P’) released at any given moment (≡ fractional yield = f) is lighter than the isotope ratio of the “reactant at the same instant” (R) by a constant measure determined by the kinetic isotope fractionation factor (aP/R )  As the irreversible conversion of R into P’ proceeds, both become increasingly enriched in the heavy isotope: the stable isotope composition of reactants and products are related by the (i) fractionation factor (aP/R )  and (ii) reaction yield (fraction of reactant remaining). This is formulated in the “Rayleigh fractionation equation” (eq. 1).

Moreover, the Rayleigh fractionation model enables to calculate the conversion yield (≡ “maturity”) based on the stable isotope composition of the products (hydrocarbon gases) if the stable isotope composition of the initial reactant (isotopically homogenous kerogen) can be estimated. The “Chung diagram” model is one of several models commonly used in hydrocarbon gas geochemistry to, among other things, estimate the source d13C and maturity of natural gases (Chung et al., 1988; Rooney et al., 1995). The principle of the “Chung diagram” is schematically represented on Figure 4. 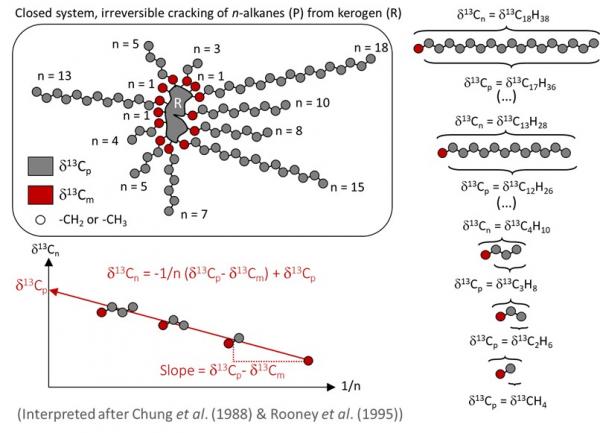 Figure 4: Schematic representation of the principles underlying the “Chung diagram”, which plots the stable carbon isotope composition (d13Cp) of hydrocarbon gases against the reverse of the number of carbon atoms in the molecule (1/n) (interpreted after Chung et al., 1988 and Rooney et al., 1995). The model assumes that hydrocarbon gases (and higher molecular weight n-alkanes) are cracked (irreversible reaction) from kerogen in a closed system (no exchanges of reactant -kerogen- and products – n-alkanes- out of the source rock system). The model also assumes average isotopic homogeneity of the reactant (d13Cp), with a Kinetic Isotope Effect affecting only “the carbon atom involved in the cracking reaction” (depicted in red in the scheme above and having an average d13Cm value expected to be lighter than the average kerogen d13Cp). (please note d = delta due to website software not supporting symbols)

In the “Chung diagram”, a linear trend can be traced through the data points and extended to the y-axis at a d13C value that corresponds approximately to that of long-chain n-alkanes (oil) and kerogen, as shown graphically on Figure 5. This is valid under the assumption that the system has worked as a closed system, i.e., the gas corresponds to the “pooled products”. 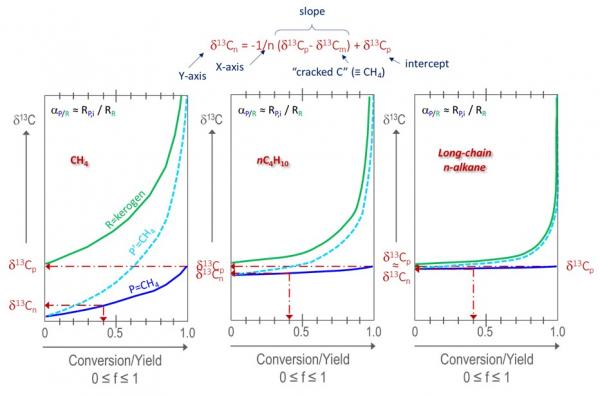 Figure 5: Schematic representation on how the “Chung diagram” (d13Cnvs 1/n) relates to the Rayleigh stable isotope fractionation effect as depicted on Figure 3.

If the closed system conditions cannot be assumed, for instance if the pooled hydrocarbon products have been expelled from the source rock followed by renewed generation, the “Chung diagram” assumptions are likely to yield erroneous interpretations, as depicted schematically on Figure 6.

If generation were to take place after expulsion of pooled hydrocarbon products at higher maturity yet, the d13C composition of the hydrocarbon gases may potentially indicate erroneously high maturities and/or 13C-rich sources. With fluids that could be expected to be quite dry (enriched in methane), these gases may easily appear to have isotopically heavy humic sources, or even present partially or totally isotopically reversed trends with d13C-CH4 ≥ d13C-C2H6 ≥ d13C-C3H8 etc. (Fig. 7). 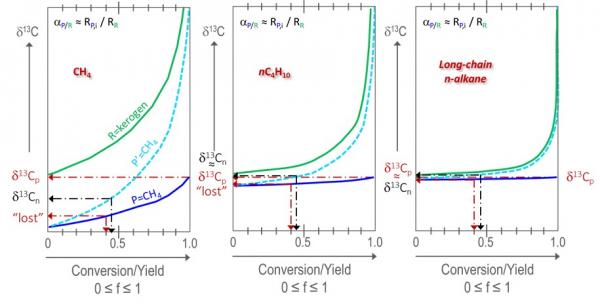 Figure 6: Schematic representation of how the d13C composition of hydrocarbon gases, especially the lower molecular weight compounds (methane, ethane,..) does not represent that of pooled products if products generated at lower maturities (conversion yield) have been expelled/lost. The 13C-enrichment of the products (“instantaneous products”) can easily be misinterpreted for a higher maturity (or an isotopically heavier source). 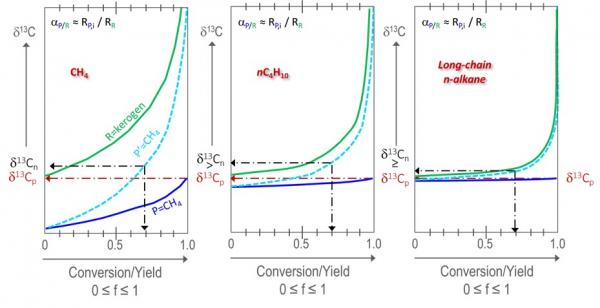 Figure 7: Schematic representation of how erroneously assuming a closed system may lead to estimating inexact d13C values for the source of gas samples, as well as generate partially or totally reversed isotopic trends.

Figure 8 shows an example for gas data from selected wells from the Oseberg field in the Norwegian North Sea. Two main trends can be identified here; gas samples from several wells are projected to have been sourced from a kerogen/oil of d13C ~ -27‰ while samples from well 30/6-27 are overall isotopically heavier, with the projected trend indicating a source d 13C of ~ -24‰. Although these gases could have an isotopically heavier source, the 13C-enrichment of the gases from well 30/6-27 could also result from different generation and expulsion histories. The bulk d13C composition of the oils from the same wells shows very similar characteristics and does not indicate that generation from different source intervals is likely. 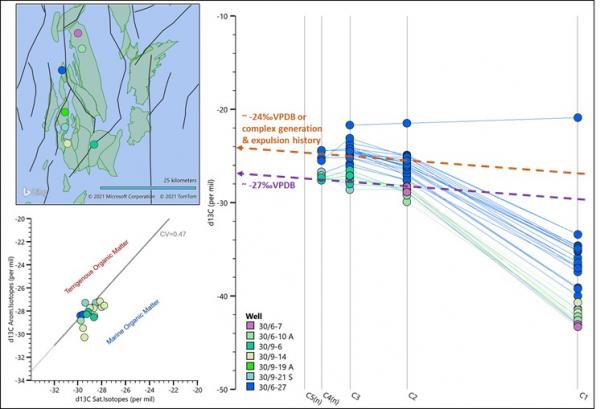 Figure 8: “Chung diagram” (after Chung et al., 1988; right) showing gas data for samples from selected wells of the Oseberg field, Norwegian North Sea (upper left). A plot of d 13C-Saturates vs d13C-Aromatics for oils from the same wells are shown for comparison (after Sofer, 1984; bottom left).

This, together with the fact that well 30/6-27 is located on a different structural block and that the gases are produced from stratigraphically older intervals, highlights that the generation and expulsion history should be considered in the interpretation, as it could possibly explain the two trends seen on the “Chung diagram”.

In conclusion, a critical interpretation of models such as the “Chung diagram” can provide useful information on the petroleum system when interpreted in the holistic petroleum geochemistry context.