Petroleum systems modelling (PSM) has the ultimate aim of reducing the charge risk in a given basin, acreage or prospect. With this in mind, PSM flowcharts are typically designed for (or adapted to) a particular software, to increase efficiency, optimize costs and assure input-output consistency throughout the different stages of the modelling. Although most commonly-used PSM software packages have similar basic functionalities, based on physico-chemical laws that determine where petroleum is generated, how it moves, and where it accumulates (Downey, 2014), they differ in the diversity and complexity of the algorithms, modes of parameterization and setup of boundary conditions, display capabilities, etc. This can be attributed, at least in part, to different perspectives on the advantages and limitations of PSM and its primary applications. It can thus be argued that complementary modelling techniques/approaches, and software packages, may be combined to improve the potential of PSM.

We demonstrate here the usage of combined 2-D and 3-D (map-based) basin and petroleum system modelling techniques to constrain the thermal history and de-risk hydrocarbon charge in frontier rift basins, with an application to the Namibe Basin, a deep-water rift margin offshore southern Angola. This study was completed for PGS, to accompany their multiclient seismic GeoStreamer@ seismic data, ahead of the 2019 public bid rounds by the Angola National Oil and Gas Agency (ANPG), and has been presented at the Geological Society meeting – Celebrating the Life of Chris Cornford (Cunha et al., 2019a), and the PESGB-Africa 2019 conference (Cunha et al., 2019b).

The models use the 2-D and 3-D GeoStreamer@ seismic data acquired by PGS in 2011, where the fundamental elements of the petroleum systems in the prolific conjugate Santos-Campos margin and the Kwanza Basin to the north have been identified, including thick syn- and post-rift sediment packages with alternating reservoir and seal facies, and a thick Aptian salt layer. The presence of good-excellent source rock horizons can also be inferred in the Namibe Basin, from published studies and publicly available geochemistry data along the West Africa and South America margins.

For the 2-D modelling we use TecMod-2D (GeoModelling Solutions, GmbH), to recover the thermal structure of the margin along a high quality deep seismic transect. TecMod-2D solves simultaneously for basin-scale (e.g. sedimentation, compaction, maturation) and lithosphere-scale (e.g. crust/lithosphere thinning, break-up, flexure, serpentinization) processes, and iteratively inverts for the stratigraphy, varying the sedimentation rates and/or the paleowater depths (Rüpke et al., 2008). The modelling therefore provides self-consistent thermal and burial histories for a given lithosphere parameterization and stratigraphic input (Figure 1). This is a powerful tool in frontier basins, where there is only scarce (if any) information on the present-day and past thermal regimes. 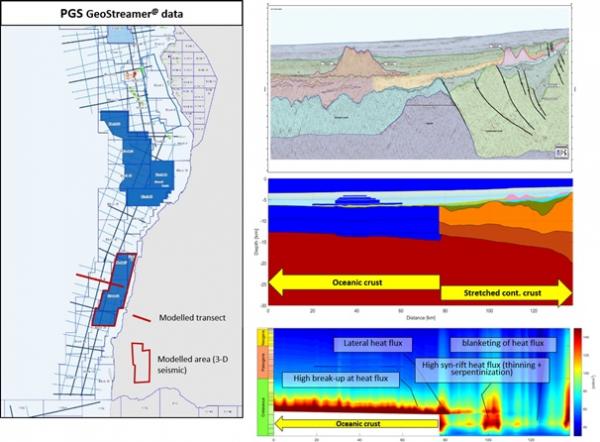 Figure 1. Left – Location of the PGS GeoStreamer@ data and exploration blocks offshore Angola. The modelled seismic transect across the northern Namibe Basin is depicted by the thick red line. Right – Main interpreted seismic horizons, including the base of the continental and oceanic crust (top); model-predicted lithosphere structure, providing a good fit to the observed stratigraphy, and taking into account the rifting and break-up processes, sill intrusions, salt deposition, and the flexural rigidity of the lithosphere (middle); and predicted heat flow through time at base sediments, highlighting the contributions from different processes (bottom).

The constrained heat flow history can then be extrapolated to the whole area covered by the 3-D seismic data, for example using a series of pseudo-wells that account for the lateral variations in the structure and burial history of the margin (Figure 2 - Top). We use the 1-D Genesis and map-based 3-D modelling Trinity software (Zetaware@, Inc.), which allow rapid parameterization and low running times of model experiments, and thus efficient testing of multiple scenarios for variations in key model inputs. The modelling predicts maturity and oil and gas expulsion from regionally important source rock horizons to occur at different stages of the margin evolution, and low charge risk at numerous syn- and post-rift structures (Figure 2 - Bottom). 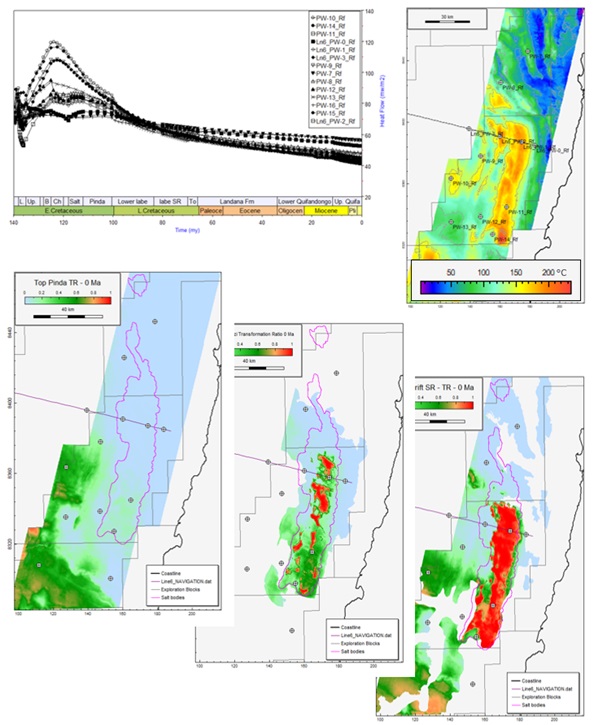 The methodology followed in this study is particularly suitable to de-risk hydrocarbon charge in frontier rift basins and passive continental margins. Depending on the number and complexity of tested 2-D and 3-D modelling scenarios the analysis may take between a few weeks and up to two-three months, and is ideally phased to allow integration of the modelling results into the knowledge of the petroleum systems and objectives of the study. While using a variety of modelling software and methodologies might add time/costs to a project (e.g. software licenses, staff expertise, setup/parameterization of models), we argue that combining complementary modelling approaches and potentialities, which are compatible within a given flowchart and timeframe, may contribute to further reduce the uncertainty in petroleum systems modelling.