Kerogen is the semi-solid polymeric material that is insoluble in both water and organic solvents, and which forms the majority of the organic matter present in a petroleum source rock.

It consists of a mixture of preferentially-preserved resistant biological polymers such as algaenan, and randomly condensed smaller molecules such as lipids, sugars, amino acids, etc., that may contribute to amorphous kerogen as burial and diagenesis proceed.  Kerogen structures are highly complex and partly random, depending on the biological sources of the sedimentary organic matter and the environmental conditions of deposition.  Consequently, it is likely that source rocks all differ in the detailed chemical structure of their kerogen; indeed, kerogen composition will vary both stratigraphically and laterally within a source rock interval.

The polycyclic biomarkers that are routinely analysed in petroleum geochemistry, including the near-ubiquitous hopanes and steranes, are derived from lipids in a range of different organisms in the depositional environment of the source rock.  Lipids are (relatively) small molecules that are insoluble in water but soluble in organic solvents, and typically contain one or more functional group in their structures.  Examples include sterols, one of the potential precursors of sterane biomarkers, and hopanepolyols which form the hopanes (and other stable hopanoids) in source rocks (Figure 1).

Figure 1: Lipid precursors (centre) of hopane and sterane biomarkers (left) which are both present in the solvent-soluble bitumen of source rocks and bound into the kerogen structure via one or more  of their functional groups (right).

The functional groups (e.g. acid, alcohol, ester) and double bonds of lipids are generally unstable during sediment burial and diagenesis, and undergo various reactions and transformations – including their eventual loss and production of relatively more stable hopanes and steranes in the bitumen (solvent-soluble organic matter) of a source rock.  However, a potentially more significant intermediate fate of these lipids is for the functional group(s) to react with the newly-forming kerogen structure during diagenesis, binding the lipid biomarker into the kerogen, and thus temporarily protecting it from further diagenetic transformation (Figure 1).

The chemical structure of kerogen is notoriously difficult to analyse, as the organic material is polymeric and not amenable to routine fingerprinting techniques of gas chromatography (GC) or liquid chromatography (LC).  The kerogen structure must be broken down into smaller pieces, either through application of heat (pyrolysis) or chemical reagents to break many of the bonds, allowing the smaller products to be analysed by GC-MS and/or LC-MS.  Such methods are not routinely employed in the petroleum industry and will not be expanded upon here.

However, several papers reporting data from conventional geochemical methods have indirectly shown the very high concentrations of biomarkers in the kerogen of immature source rocks, including a maturity study of a Barents Sea well (Farrimond et al., 1998).  The concentrations of hopanes and steranes in the bitumen of rocks in this well increase dramatically with burial before the oil window is reached (at ~2300m, defined by Rock Eval parameters; Figure 2).  The data suggest that immature source rocks have 5 or 10 times as many biomarkers bound into the kerogen as are present as free hopanes and steranes in the bitumen.  The release of most of the biomarkers from the kerogen before the oil window is reached explains why biomarker concentrations are highest in the first oil to be expelled from a source rock, and are only minor constituents of oils generated later in the oil window. 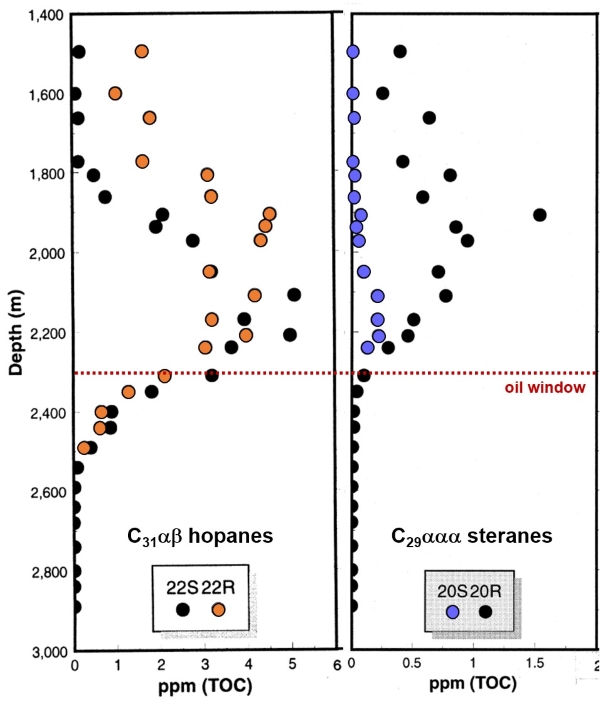 Figure 2: Depth profiles of solvent-extracted C31 ab hopane (22R & 22S) and C29 aaa sterane (20R & 20S) concentrations (in ppm normalised to TOC content of the sediments); modified from Farrimond et al. (1998).  Note the large increase in concentrations as these biomarkers are released from kerogen in the sediments.

Although some of the increase in hopane and sterane concentrations in the bitumen may be due to conversion of functionalised precursors such as sterenes, hopenes and hopanoic acids, these are insufficiently abundant to explain much of this increase (Farrimond et al., 2002); the kerogen remains the most likely source for most of the generated hopanes and steranes.