IGI Ltd and project partners Lloyd’s Register have produced an extensive petroleum geochemical database for the UK Continental Shelf, the work was funded by the UK Oil & Gas Authority, and the final geochemical database has been released publicly through their website.

In a project commissioned by the Oil & Gas Authority (OGA), IGI has collaborated with Lloyd’s Register to undertake the compilation of an integrated geochemical and geological database incorporating released data from the UKCS. IGI, having extensive data compilation experience, assembled geochemical data from multiple sources into a comprehensive, high-quality dataset encompassing onshore and offshore UKCS wells. Lloyd’s Register, having established geoscientific knowledge, provided the stratigraphic framework which seamlessly populates the geochemical databases.

In order to make the data more easily accessible, the UKCS dataset was divided into five regional databases based on major geological areas as defined in a shapefile available on the OGA data portal (‘OGA_Geological_Major_WGS84.shp’). Some of these major geological areas have been combined to define the five areas used in this project:

The complete UKCS database contains a wide range of petroleum geochemical data types for 91,348 samples from 2,758 wells on the UKCS, including 3,592 oils/condensates.  The data were obtained from several sources:

The geochemical database was compiled in IGI’s Metis and p:IGI+ software, although an Excel version of each database file has also been made available.  The extremely comprehensive data model in IGI’s software suite allowed the full range of geochemical data types to be compiled, including:

The UKCS Geochemical Database (and the five regional databases) can be downloaded from the OGA website under the heading “UKCS Petroleum Systems Project: Year 1”: https://data-ogauthority.opendata.arcgis.com/search?tags=32nd%20Round 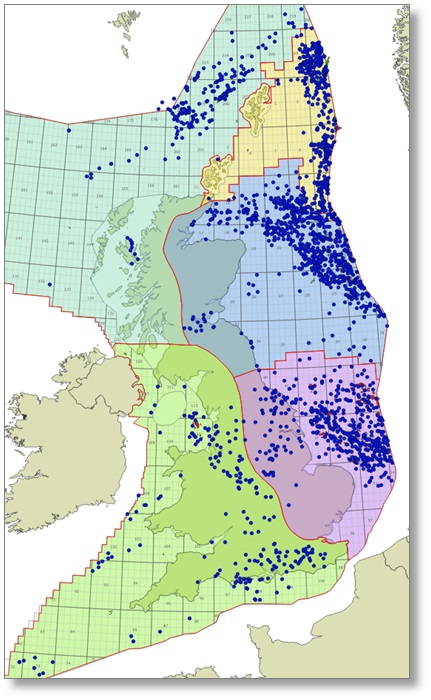