The Wessex Basin is well exposed on “The Jurassic Coast” in southern England and is significant in containing an important oilfield at Wytch Farm.  Although long past its peak, this field still produces oil, as do several other smaller fields, and additional potential resource is attracting attention.  Besides the various fields and discoveries, oil-impregnated sandstones are found at several locations on the Dorset coast, such as Osmington Mills (Fig.1).  Recognition of these oil seeps by industry geologists in the 1930s encouraged the early oil exploration in the basin, ultimately leading to the discovery of the small field in Kimmeridge Bay in 1959 which is still producing today.  The Wytch Farm field was initially discovered in 1973 and extended significantly through the 1980s and 1990s when it was the largest onshore oilfield in Western Europe.

There is no shortage of potential source rocks in the Wessex Basin, the Jurassic containing (from oldest to youngest) various Liassic shales (Blue Lias, Shales with Beef, Black Ven Marls), the Oxford Clay and the world-renowned Kimmeridge Clay.  All contain shales with good to excellent oil source potential, but the Lias is considered the primary source rock in the basin as it has been sufficiently deeply buried south of the Central Wessex High.  The Oxford Clay may have reached the oil window in some limited parts of the basin but is thought not to have expelled oil (England, 2009).

Evaluation of oils and/or reservoir core extracts from most of the fields and discoveries, as well as oil seeps from three localities on the coast, show that the oils all belong to a single marine clastic source consistent with the composition of the Lias shales in the basin (England, 2009).  The oil seeps are variably biodegraded, which can complicate their interpretation (Bigge & Farrimond, 1998).  However, despite this, careful interpretation of the molecular composition of the oils and seeps shows some variation in their source maturity.  For example, a cross plot of two sterane isomerization parameters (%20S and %abb for the C29 steranes; Fig.2) shows a group of samples with higher maturity.  These are the oils from the Triassic Sherwood Sandstone reservoir of Wytch Farm and the oil seep from the Bencliff Grit at Osmington Mills.  Oils from the Bridport Sands reservoir in Wytch Farm and other fields or discoveries show lower values for these maturity parameters, indicating generation from the source rock at a lower maturity level. 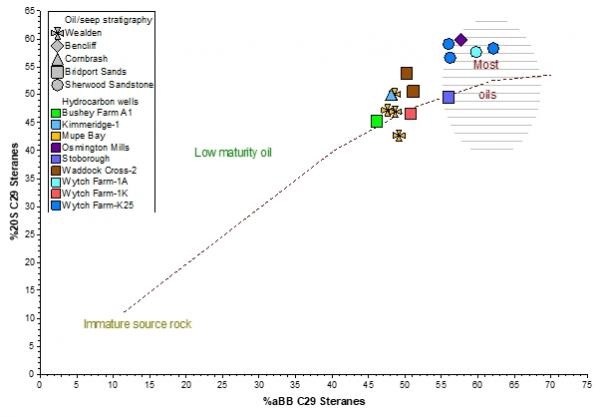 Combined with maturity modelling of the Lias source rocks and a consideration of the biodegradation history of some oils in the basin (associated with reservoir temperature and palaeopasteurisation), a view can be obtained of the complex hydrocarbon expulsion, migration and charge history of the area (England, 2009).

Acknowledgement:  Thanks to BP and Egdon Resources for providing the oil samples for various M.Sc. and Ph.D. research projects conducted under my supervision at Newcastle University in the early 2000s, some data from which are shown here.